BQ’s books are available for preview and purchase at BeadedQuill’s Blurb Bookshop. You can also read a brief introduction to each book below. 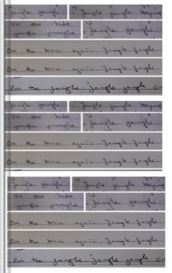 Jangle between Jangle: The poems return

To preview and purchase visit blurb.co.uk

Jangle between Jangle presents poems written on the move and sandwiched between the comings and goings of London life, circa 2018 and 2019.

The beautiful cover images of these earlier books are the work of Norfolk-based painter and printmaker, Nicola Slattery. 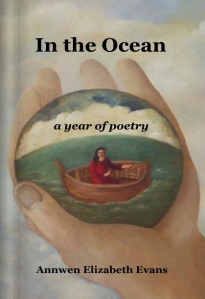 In the Ocean: A year of poetry

To preview and purchase visit blurb.co.uk

BeadedQuill set herself a creative challenge. For fifty-two weeks, she would share two poems a week on her blog. “My rationale behind the 2×52 project,” explains Evans, “was that if I produced work consistently, some of it would be reasonable and some of it might be dismal. But by the law of the bell curve, a percentage was also bound to be close to good.” Across the year, her 104 poems journal ordinary affairs, imaginative meanders and transcribed dreams. “In the Ocean” is this log of a year of poetry.

Once again, the cover art is the work of the generous artist, Nicola Slattery.

Emily’s Poems for the Modern Boy

The limited edition run of this popular title is out of print.

The Modern Boy, by his own admission, can be rather boorish and in such a bothering rush. Patient and curious Emily has made notes based on her observations of his kind. For his pleasure and edification she presents twenty-five poems offering insights about work, life and on love.

Shining in Brightness: Poems from a mystical decade

Beaded Quill’s first volume was published in early 2013. Shining in Brightness presents 20 poems written by the poet between the ages of 18 and 30.  BQ declares these twelve years, “a stretched decade, a mystical decade.”

During this time she travelled, studied and worked abroad. ‘I grew up in a leafy Cape Town suburb. On scholarships I studied in the USA, UK. Then I worked in Europe, Latin America, the Eastern Cape (a province of South Africa).  I now live in leafy North London.’

It is an international experience of ‘quiet suburbia’ that Evans finds particular inspiration. ‘It’s a mileu, the world over, that produced similar versions of me. I don’t think my life is unique. My poems could have been written by any young woman of similar means and opportunity. We went to university. We travelled. We loved and lost. Now we find ourselves sort of grown-up, almost back where we started and reconciling what happened in our twenties.’

Shining in Brightness courageously takes on the project of reconciling youthful experience. Early poems, such as ‘To whom it may concern,’ echo a creative timidity and self-consciousness. Through the sets, the poet’s voice grows in confidence, inviting us in poems such as ‘Here is something to marvel at’ and ‘Pavement Walker’ to observe the world with her.

Nicola Slattery’s wistful illustration of a girl aloft on the wings of a blackbird echoes beautifully the volume’s whimsical tone and the metaphor of creativity as a journey.

The volume’s title derives from a poem about a restaurant meal. ‘The poem recounts a prosaic moment, that’s also a numinous communion. The objects and the moment between the diners are frozen in time like a still life, or a memento mori.’

In the explanatory essay that accompanies the poems, Evans reveals that the other diner is her father. He passed away in 2009 after a battle with colon cancer and it is to his memory that she dedicates the volume.

Eight years passed from the moment of the meal to the poem’s creation. Evans observes, ‘when it comes to creativity and memory, experiences fly as they will backwards and forwards between seasons.’