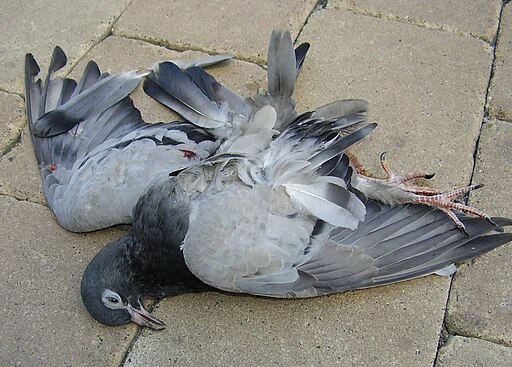 By Kulmalukko (Own work) [CC BY 3.0 (http://creativecommons.org/licenses/by/3.0)%5D, Dead pigeon via Wikimedia Commons

The evening of score

You will stand at a window
The clouds will part.
A dead pigeon will fall
down thud down at
your feet. The day will turn.
We now bar the exits.

—
As mentioned last week, I have been expanding my Spotify playlists to include Grime and Rap. The latest is Trap (which as a term new to me I had to look up in the urban dictionary).

It is lazy of me to describe these tracks generically as ‘angry music’, but in contrast with ambient woodland meditation, on the surface they are. It was out of curiosity about this perceived musical-emotional attitude that I clicked on the playlists in the first place. And hallelujah! Because angry music is hard liquor from which I am enjoying a good drink at the moment.

The rhythmic beats and aggressive vocalisations takes my current writing along some highway with pace and fury. I recognise the creativity in compiling a whole song about ‘Shutup’ or ‘Shutdown’ or ‘Feed ’em to the Lions.’  In my time, I’ve struggled to configure resonant poems and pages about topics like disappointment, revenge, hope, personal and collective narrative. It’s there in these songs and many many people are moved by them. These Rap, Grime, Trap creators make it look easier and more fired to write such material than I’ve found it to be.

To my surprise, it’s the verse among the beats and aggression that makes me stop and listen. I jot down the lines I really like. Some blog appropriate ones include: “Tomorrow I’m going to come scoop you.” “Go on, then, go on.” “I’m so London; I’m so South.” “I used to wear Gucci, but I put it all in the bin. That’s not me.”

Granted, what I’m absorbing is commercialised and comfortably distant from my quiet, rented room with its pink lampshade and chintzy duvet cover. I acknowledge that I am not tough or ‘cool’ or ‘street’ or whatever. Not by the longest shot. I am a library geek who enjoys opera and symphony concerts. At the moment, I don’t drink, I spend my evenings doing press-ups and am reading Chinese poetry in translation and a volume of Afrikaans letters. In the words of JME, compared with the heavy flavours of the Rap, Grime and Trap world, I may have, “No taste, like vegan cheese.”

Here comes Skepta with ‘Track 5.’ Like other wanderers, he taps into his surrounding urban landscape, “Suffering from the dark psychosis”… “Just me and my cats and the foxes roaming the streets at night.” Through the song he treads London streets and the back alleys of one’s personal, vocational and creative direction. Such London street narratives take me back to the Museum of London’s Dickens exhibition of a few years ago. One of my favourite exhibits was an artist’s video. Footage of London streets was voiced over with Dickens’s descriptions of his night time wanderings around the city. Perhaps at some point this poet-storyteller Skepta and I really could wander London’s back streets. And after the meander, we could stop for tea.

It occurs to me – through the song we have already made the meander. And it’s now that time of the afternoon for tea. I have a choice of Waitrose English Breakfast or Fortnum and Mason’s Russian Caravan. Apparently Skepta also enjoys tea, just not the crumpets.

Grime! Grime! Feeling super. And coming next week with more poetry from the Spotify highway.