Here follows a piece I wrote recently about the work of contemporary Swedish artist, Per-Inge Isheden.

In London’s Mayfair is a Regency building with eight flights of narrow stairs. Above those stairs, in the highest apartment, I first viewed “Inferno” (2007; image right). The vollmilch nymphs pouring champagne and the domestic and psychological interiors hinted at fin-de-siècle Vienna.  Although I didn’t recognise the man in the painting, he had the air of a Freud, a Marx or a Mahler. So I deduced that he might be a nineteenth-century man of letters, shadowed by his boy-self in the open doorway behind him. The door ajar, open books and mirror called up Jung, Derrida and the liminal zone so beloved by psychoanalytic cultural theory. I sipped my drink and in reverie marvelled at how the canvas-now-painting, and even the nymphs’ reflective champagne bottle, functioned as zone bending lintels.

My host brought me to focus, “That’s August Strindberg, the famous Swedish author and playwright. He had many troubled relationships with women. And this portrait of him was painted by a contemporary Swedish artist, Per-Inge Isheden.”

“Inferno’s” internal narrative and Zeitgeist references transferred the significant dimensions of the story: the psycho-creative biography of a noteworthy, nineteenth-century man of letters. That it so deftly crosses generational and national boundaries is one of the strengths of Isheden’s work. This is made evident by his online popularity, for most of his followers know his paintings via MySpace, Facebook and his website. Fans from as near as the Netherlands and as far as Japan and Brazil have been prompted to visit his studio in Sweden. Fan ‘MCS’s’ online comment, “I love your painting techniques. The colours always reach out to me,” echoes the sentiment of viewers from across the globe. Isheden’s art touches them aesthetically and viscerally.

A pan-global consumerist, metropolitan experience permits so many of us to access Isheden’s work. “I have fans from almost every country I could think of: Japan, Chile, Brazil, Colombia, Gambia, Puerto Rico, Indonesia, Tunisia, Taiwan, Martinique, Croatia, South Korea, Argentina,” notes the artist. Certainly, Isheden’s nudes and Icon portraits relate to a now international Western visual vocabulary. Yet, even his Sweden-specific images resonate with non-Swedes. The Stockholm cityscapes parallel other metropolitan scenes, while those of the Swedish countryside echo a nostalgic familiarity with distant pastorals. 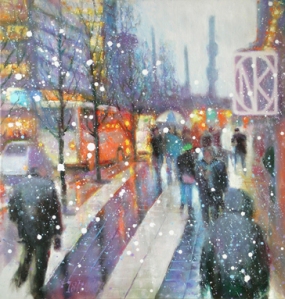 In cityscapes, like the series “Outside NK” (2005-2013; image left), Isheden captures the artificial light that punctuates Sweden’s winter darkness. Identifying these paintings as, “experiments in light, colour and texture,” Isheden sets his approach within an historical fascination with painting’s technical elements. Inevitably the Impressionists, those recent masters of capturing light, come to mind. But the preoccupation may be traced back further in art history, and Isheden also names predecessors such as Tintoretto (1518-1594), Rembrandt (1606-1669) and Vermeer (1632-1675) as influences.

An artist pivotal to Isheden’s work is Cezanne (1839-1906), whose exploration of picture plane and composition Isheden has studied for decades. “In the dislocation of the surface, the ‘bent up’ table, the flatness of the painting and the guided tour for the eyes,” Isheden identifies “That Summer When…” (2008) as a painting which exemplifies his integration of some of Cezanne’s pictorial concerns.

In a step-by-step documentation of “Artist and Model” (2011; image bottom left), a portrait of Picasso (who, interestingly, was also influenced by Cezanne), we see Isheden’s trademark approach in his Icon portraits of creating many picture planes on one canvas. The portrait’s physiognomy, composed of references to Picasso’s well-known works, the model and the artist, is reminiscent of Arcimboldo’s playful composite portraits of circa the mid sixteenth century. In one uncanny instance – the portrait of a gardener – the items in the composition echoed the sitter’s profession, as the paintings and model do in this work.

1960s icons and a wink to Pop Art reverberate in Isheden’s work. In adhering to the tradition of the painted canvas and exploring compositional planes, Isheden’s Icon portraits resound with Lichtenstein’s comic-frame paintings (1960s) and, interestingly, harks back to Isheden’s earlier career foray in comic-book illustration. In subject matter, Isheden’s Icon paintings echo with Warhol’s celebrity portrait prints (1960s-80s). However, there are differences. Isheden explains, “I have, as Warhol did, painted Marilyn Monroe. But for totally the opposite reason! Warhol stated, ‘There is nothing hidden underneath my work, what you see is all.’ His portrait simply shows what Marilyn looked like.”

“In my work most of the content is ‘hidden underneath.’ In the face of the young beautiful woman you see a middle-aged overweight woman in a messy bathroom. This invites you to reflect over what growing older means to a beautiful woman.”

In painting an imaginary, ageing Marilyn Monroe, Isheden presents two related themes of Western visual culture: beauty as it is embodied by the female form and the meanings this embodiment might sustain. Isheden’s portrait of Norma Stitz, situated by its title within the tradition of Venus paintings, explores these two themes with its referential visual overlays.

‘OUR VENUS’ – THE VENUS OF ARLINTON

In “The Venus of Arlington (Norma Stitz)” (2008; image right) the subject is clothed rather than nude, as is traditional for images depicting Venuses and Odalisques. However, her clothes draw attention to her voluptuous form rather like the drapes and sheets in other Venus images. The clothes worn by our Venus are comfortable.  She is not the wasted prostitute of Montmarte nor is she the fleshy concubine of court. This is a Venus who lives the ordinariness of our modern world. However, she is not the airbrushed, slender blonde considered a normative beauty by many magazine covers.

Stitz poses next to a section of the late fifteenth century Cluny Tapestry, ‘À Mon Seul Désir.’ Considered one of the great treasures of Western visual culture, it falls outside the conventional High Art canon. Likewise, the statue of the Willendorf woman, previously known as the Venus of Willendorf (c. 25,000 BCE), is another visual treasure referenced in the image that falls outside this canon. Stitz’s voluptuous beauty, these referenced treasures and, indeed, Isheden’s style – described as “a mixture of refinement and vulgarity” – gather together in a figurative corner where they create their own, new visual magic.

Stitz had requested that Isheden paint her and declared the result, “closest to my true image.” This paired with suggestions that the Willendorf figure may be a self-portrait adds further echoes. “Venus of Arlington’s” allusion to the Willendorf woman therefore fuses ancient fertility rituals with a mode of self-representation. Viewers have commented on this visual sustenance, with one online fan unwittingly referencing language of ancient earth goddess traditions: “Dear Per-Inge, Norma is wonderful. She is like one of your ripe pieces of fruit begging to be bitten into. How wonderful for her to have been touched by your brush.” Through this representation of herself, Stitz – our Venus – has gifted to the artist and a modern Post-industrial humanity, a renewed visual fecundity.

“Venus of Arlington,” “Artist and Model,” “Outside NK” and “Inferno” present visual escapades both in subject narrative, composition and references. Isheden’s work is deceptively unpretentious. Yet, it consciously and conspicuously wears an impish manteau of representational and aesthetic traditions. Fan Renate Kauffman notes of “Inferno” what can be said about many of Isheden’s layered panoramas, “It presents a complete story, while still casting questions about the scene. I could hardly take my gaze from this work.” With their mini-storylines writ in swirling composition, Isheden’s puckish paintings draw us in and we cannot but be touched by his brush.

You can view more of Isheden’s masterful paintings and learn more about his prolific career at http://www.ishedenart.se/

You can read more of my writing in my recently published volume of poetry, SHINING IN BRIGHTNESS. It is available for preview and purchase at blurb.co.uk.

For more of my comments on art, visual culture and things puckish, follow me on Twitter. I’m @BeadedQuill

One thought on “PUCKISH PAINTINGS ABOVE THE STAIRS”