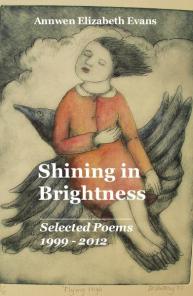 Our twenties is a time filled with firsts. According to research it is the decade we remember most vividly. Many of us document our experiences, often with the intention of doing something with those journals and emails about our gap years and unrequited crushes. Writer Annwen Elizabeth Evans, now nearing 32, has done just this and distilled her experiences into a first volume of poetry.

Shining in Brightness presents 20 poems written by Evans between the ages of 18 and 30. Evans declares these twelve years, ‘a stretched decade, a mystical decade.’

During this time she travelled, studied and worked abroad. ‘I grew up in a leafy Cape Town suburb. On scholarships I studied in the USA, UK. Then I worked in Europe, Latin America, the Eastern Cape (a province of South Africa).  I now live in leafy North London.’

It is an international experience of ‘quiet suburbia’ that Evans finds particular inspiration. ‘It’s a mileu, the world over, that produced similar versions of me. I don’t think my life is unique. My poems could have been written by any young woman of similar means and opportunity. We went to university. We travelled. We loved and lost. Now we find ourselves sort of grown-up, almost back where we started and reconciling what happened in our twenties.’

Shining in Brightness courageously takes on the project of reconciling youthful experience. Early poems, like ‘To whom it may concern,’ echo a creative timidity and self-consciousness. Through the sets, the poet’s voice grows in confidence, inviting us in poems such as ‘Here is something to marvel at’ and ‘Pavement Walker’ to observe the world with her.

Nicola Slattery’s wistful illustration of a girl aloft on the wings of a blackbird echoes beautifully the volume’s whimsical tone and the metaphor of creativity as a journey.

The volume’s title derives from a poem about a restaurant meal. ‘The poem recounts a prosaic moment, that’s also a numinous communion. The objects and the moment between the diners are frozen in time like a still life.’

In the explanatory essay that accompanies the poems, Evans reveals that the other diner is her father. He passed away in 2009 after a battle with colon cancer and it is to his memory that she dedicates the volume.

Eight years passed from the moment of the meal to the poem’s creation. Evans observes, ‘when it comes to creativity and memory, experiences fly as they will backwards and forwards between seasons.’

This is a sample press release for my recently published first volume of poetry, SHINING IN BRIGHTNESS. Do you know of a newsletter, community of readers or similar that might be interested in the work? Post your suggestion as a comment or email (beadedquill@gmail.com).

2 thoughts on “POEMS FROM A MYSTICAL DECADE”